Why do we measure exposure levels? 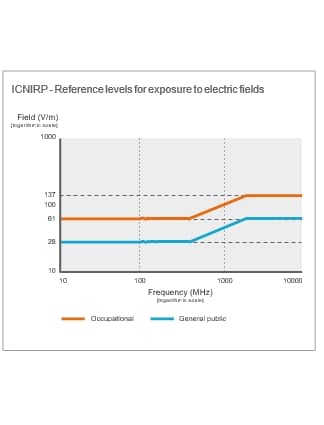 To protect individuals from the potential health effects of radio waves, protection levels known as basic restrictions were recommended by the International Commission on Non-Ionizing Radiation Protection (ICNIRP). The ICNIRP is the non-governmental organization officially recognized by the WHO and the International Labor Organization (ILO) in the field of Non-Ionizing Radiation. These basic restrictions were established based on published biomedical studies and relative to the health effects of elec- tromagnetic waves. In the area of high frequencies, they are expressed in terms of Specific Absorption Rate (SAR) and the biological effects appear above 4 Watts per kilogram for the entire body (increase in body temperature of more than one degree) and above 100 watts per kilogram locally. The basic restrictions are set so as to take into account uncertainties related to personal sensitivity, environmental conditions and diversity in the age and state of health of the populations concerned. The protection levels for workers were established at one tenth of these exposure levels pro- ducing an impact, and fifty times lower for the general public. For the general public, the basic restrictions thus require that the power absorbed per kilogram (SAR) be at 0.08 W/kg maximum for the entire body and 2 W/kg maximum for 10 grams of tissue.

Regulation linked to the exposure levels

In Europe, the exposure limits follow the European Union Council Recommendation 1999/519/CE of July 12th 1999 regarding the public exposure to electromagnetic fields. The exposure limit values are revised periodically if needed. The last report from the Scientific Committee on Emerging and Newly Identified Health Risks (SCENIHR), an independent European Commission body, on the health effects of electromagnetic fields, came out in January 2009. The conclusions of this report do not challenge the exposure limit values proposed by the above-mentioned European recommendation.

However, different approaches are applied in certain member states with the introduction of more restrictive limits in "living areas" (Belgium, Bulgaria, Greece, Italy, Lithuania, Luxembourg, Poland, Slovenia). The same goes for Switzerland and Liechtenstein. The values chosen by these States are based on the application of the principle of precaution related to potential health risks related to exposure to electromagnetic fields and the exposure limit values were in most cases set in an arbitrary manner.

Concerning workers, as part of the European directive on exposure of workers to the risks arising from electro- magnetic fields (directive 2013/35/EU of 26 June 2013), all employers must now determine the exposure (levels, duration), assess risks and take the necessary measures to ensure safety and protect the health of workers from the risks arising from professional exposure to these electroma- gnetic fields. In particular, they must:

Other information concerning the regulation throughout the world may be found directly on the WHO website.

In order to compare the exposure levels measured at the es- tablished limits, measuring protocols have been established by the main standardization bodies. Some examples are the ECC/REC/(02)04 recommendation and the EN50383, EN50413, EN50492, EN62311 standards in Europe and the IEEE Std.C95.3 standard in North America.

Measuring the electromagnetic field is essential to check that exposure levels respect the regulatory limits established in each country, and thus ensure the safety of individuals exposed, whether members of the general public or workers.

For individuals who work in proximity to high frequency emmiters, the measurement ensures that the emitter is switched off when the intervention takes place and/or that the electromagnetic fields are well below the recommended levels. It thus reassures these individuals who can then complete their work without worry. The introduction of a Monitoring network on the work site allows this exposure to be constantly monitored. In either case, the measurement allows the employer to check that employees have not been overexposed during their assignments.

Unlike a simulation or calculation, a measurement is concrete. Communicating the measured exposure levels, which are mostly very low as compared to the reference levels, provides reassurance for the concerned public. If the measurement reveals high levels of exposure, it then allows remedial actions to be implemented. Here again, the mea- surement can be occasional in time and space: an exposure meter can be lent to an administration official, who for a given period can check the levels to which he/she is exposed in the home or workplace, or it can be performed via a Monito- ring network, with each probe sending these measurements over time to a database or eventually to a website, which can then be used by the authorities (municipality for example) to communicate the overall exposure of a city to the public.

The measurement taken by scientists by lending an exposure meter to a representative panel also allows us to find out the average exposure for a given population, and potentially the change in this exposure according to the technology (television broadcast, 2G, 3G, 4G mobile communications, domestic networks).

How to measure exposure to electromagnetic fields?

There are two types of probe for measuring exposure to electromagnetic fields: "broadband" probes and "frequency selective" probes.

A broadband probe generally comprises a dipole and a diode connected directly between the two poles of the antenna. Using this type of probe, the voltage proportional to the field level is measured. The quality of this type of probe will therefore depend on its ability to provide the same voltage for the same field and regardless of the frequency (frequency is of course within the usage bandwidth) of the field to be measured. These "broadband" probes provide information on the level of exposure, but do not indicate the frequency of the field to which the user is exposed. They are mostly used in warning products (worker exposure meter) or for a quick measurement of compliance when measured levels remain low. This type of probe is defined by its isotropy, its band- width, its sensitivity, its measurement dynamic, its frequency flatness and its linearity.

The second type of probe, depending on the recevier topology used with it, provides information regarding the frequency and the amplitude of the measured field, as well as information on the level. They are incorporated into more refined compliance or information measuring products. They are defined by their isotropy, their bandwidth, and their an- tenna gain or factor: the dynamic, sensitivity and linearity in this case are dependent on the receiver topology used with a given probe.

Isotropy: The isotropy characterizes the ability of the field measuring probe to always provide the same response to a given field level, regardless of the direction of arrival of this field or its polarizations. It is a parameter required by most of the current measurement standards. There is no single natu- rally isotropic antenna: for electromagnetic field probes, this isotropy is thus obtained by combining the radiation pattern of three elementary antennae (dipole or monopole) appropriately placed with respect to each other.

Bandwidth: The performances of an electromagnetic field measurement probe vary according to the frequency of the field to be measured. They are thus defined to be used over a limited frequency range, known as the usage bandwidth.

Sensitivity: The sensitivity of an electromagnetic field measurement probe or system is the minimum level of the field that can be measured with this tool.

Dynamic: The dynamic of an electromagnetic field measu- rement probe or system is the difference between the maxi- mum and minimum field that can be measured with this tool. It is generally expressed in dB.

Frequency flatness: This parameter characterizes the quality of a broadband probe. It represents the variations of the measured E-field at a fixed frequency, when the level of the E-field is varied over the dynamic range of the probe.

Linearity: This parameter characterizes the quality of a broadband probe. It represents the variations in the levels measured, with fixed frequency and making the level of the field measured over the probe's measuring range vary.

The antenna factor (expressed in dB) is linked to its gain by the following equation:

In this equation, F is the frequency in MHz, and G is the gain in dBi. The power received by an antenna capturing an electroma- gnetic field can easily be found using the following formula:

In this equation, Pr is expressed in dBm, E in V/m and the antenna factor in dB.